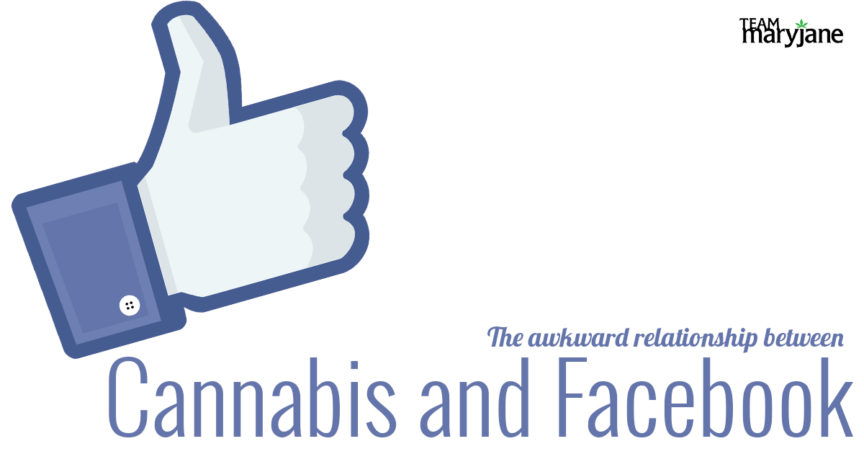 Pretty much everyone in the cannabis industry recognizes that Facebook and the legal cannabis industry have a pretty awkward relationship. There are no set-in-stone regulations with facebook, and the policy on marketing cannabis brands is usually up in the air and ready to change at a moment’s notice. Facebook Ads has a policy that states the ad cannot promote the use or sale of illegal, recreational, or prescription drugs, and it extends to imagery, such as pictures of medical or recreational cannabis even in places where it’s legal.

However, Facebook DOES allow companies related to cannabis to promote their specific business, such as glass shops and other smoke accessory shops. Essentially, people are upset because Facebook is censoring cannabis journalists. These discrepancies are instigating bitterness between the social media giant and the average business owner.

Forbes recently described the situation well by stating “The logic that a story about cannabis or scientific studies on cannabis-related medicine is promoting cannabis is completely ridiculous. A story about war doesn’t promote war nor does a story about wine entice readers to get drunk.”

The cannabis industry is without a doubt still plugging along and growing exponentially year by year. Annually, it’s generating roughly $10 billion as more states pass laws for recreational use and approve medical marijuana programs.

Meanwhile, advertising for cannabis brands, marketing agencies, and dispensaries is particularly difficult since major advertising spaces like Facebook and Google will not allow the promotion of drugs or anything related to them on their sites. Essentially, this throws cannabis brands back into the stone age of marketing, including heavy reliance on print media, blogs, newsletters and online media to promote their products.

“You would think that Facebook and some of these online platforms are the ideal platforms for these products because you can target only the legal states, target only people over 21. We would gladly follow those guidelines.” Says Aaron Smith, the executive director of the National Cannabis Industry Association.

The ones feeling the hardest hit from these social media policies are dispensaries. Native Roots, one of the larger dispensary chains in Colorado have had their social media accounts shut down and deleted on several different occasions. In fact, quite a few marijuana marketing agencies have reported that their client’s pages are often shut down with no reasoning and no notice.

In April of this year, Facebook launched community standards to help govern how individuals and businesses use Facebook, but it didn’t provide a clear picture as they promised. To adapt, most companies are using social media to focus on developing a brands aesthetic and story while slowing down on any mentions of cannabis or photos of it to prevent themselves from being pulled.

More states continue to enact laws and regulations legalizing marijuana. Hopefully, this cultural shift and this growing industry will force policymakers to create grounds for marketing cannabis brands on Facebook and Google. Until then, we just have to be careful and keep an eye on those policies. In the meantime, if you need help navigating through the weird world of cannabis social media, the social media experts at Team MaryJane are always here to help. Get in touch today!